I’ve been playing with some candy corn flowers applique recently, and that led to the creation of a new, fall table runner.  It still needs to be quilted, but I wanted to show you sooner rather than later. I don’t have a full tutorial for you, but I’ll share how I made the candy corn flowers.  I stitched a strip of orange, yellow and white fabric together to create a strip set.  Then I traced a triangle onto fusible web (Heat ‘n Bond lite) and placed it onto the wrong side of the strip set.  I cut out the candy corn triangles and then fused them onto some background fabric to create a flower.  A little zig zag around the edges and it was done!  For a full tutorial on applique, see my applique series here. I started with a 60° triangle and then decided to make it more narrow.  I brought the two lower edges in by 1/2″ to get my triangle size.  You can see the original triangle in the upper photo.  From there, you can make it as tall or short as you want.

I rounded the corners of the triangles to make it more candy corn-like.  The buttons will get added on after the quilting is finished.  To get the most use of my fabric, I alternated the direction of the triangles when cutting them out.  This gave me two slightly different candy corns.  One with orange as the predominant color and one with white as the main color.

I also changed the size of the strips to make a smaller flower from the candy corn.  The background fabric squares are 8 1/2″ for the large flower and 5 1/2″ for the small.  I decided to set them into traditional quilt blocks which measure 12 1/2″ unfinished. I stitched three of the blocks together and made a table runner.  All of this was made from my newly organized scraps.   I love being organized!  Now it’s time for some quilting. I’ve also been doing some fall decorating around the house.  I’ll show you that next week.  Remember, there’s still time to enter the I Love Home BOM giveaway for month 2. Just leave me a comment there to enter. Enjoy the rest of your weekend! 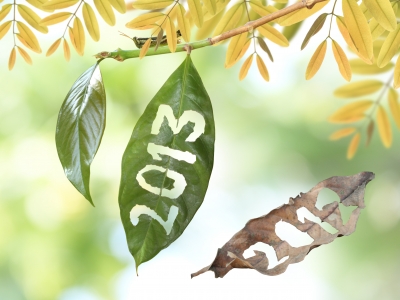 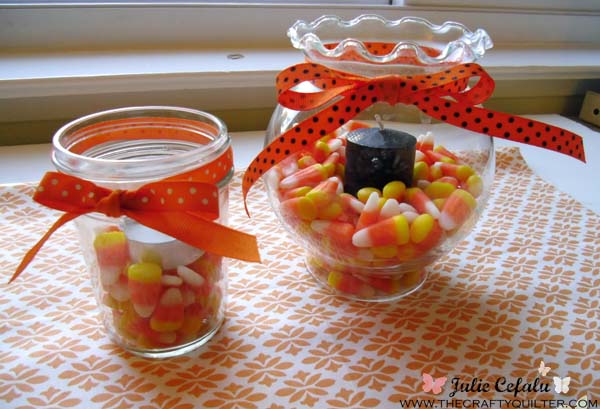